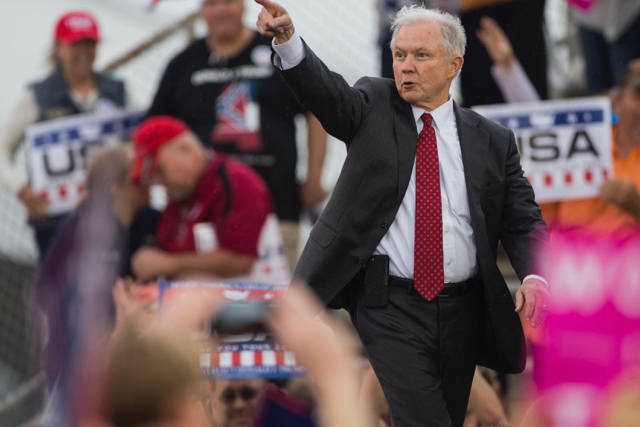 According to Politico, the group, which does not have to disclose its donors, has spent $1.75 million on ads for Price and Sessions.

45Committee’s ad promoting Sessions describes him as a “civil rights champion” and features an image of him with U.S. Rep. John Lewis (D-GA). Civil rights groups have blasted Sessions’ record on voting rights and questioned his treatment of minorities. Lewis, who risked his life fighting for civil rights in the 1960s, testified against Sessions at his confirmation hearing earlier this month.

The U.S. Senate Judiciary Committee is scheduled to vote on Sessions’ nomination on Jan. 31.

The Sierra Club is running ads blasting Pruitt’s environmental record as Oklahoma’s Attorney General. In that role, he is currently suing the EPA, the agency he is hoping to run.

A trio of progressive groups — Progressive Change Campaign Committee, Demand Progress Action, and Allied Progress Action — have launched an ad campaign against Mnuchin. The ads, which feature a widow who lost her home to a bank Mnuchin ran, will air in Arizona, Nevada, Iowa and Washington DC.

Unlike advertisements aimed at candidates for federal office, ads that support or oppose Cabinet and judicial nominees are considered “issue ads” and do not have to be reported to the Federal Election Commission. Broadcasters must report those expenditures — and the executives of the groups buying the ads — to the Federal Communications Commission. But critics say that radio and TV stations often ignore those requirements.